Where did August go?

Look at that. A month has disappeared and there has been no blog posts from me. August was a super busy month. For a start I work full-time in 10 hour shifts which are not conducive to a productive evening. In doing these long shifts, I get an extra day off a week. I choose to do them, as my theory is that in doing so - it increases the probability that I might actually get a day off with my husband. You see, being a first-year Adam is unable to request anything. Absolutely nothing, and his roster comes out too late for me to request against it, and we're both shift-workers... Sometimes its like ships passing in the night. Last year he was only allowed the Friday and Monday off around our wedding weekend, so we got a one and half day honeymoon and he can't take any annual leave until after April next year. During the last couple of months, when we do actually manage to get one or two of those rare days off together... our commitments to others result in my ending up in Southport, and Adam in Byron, or I am home and he is in Canberra etc etc. Needless to say I am sick of not seeing my husband. And to add insult to injury, I was putting our new rosters into our calendar and realised that in the space of 4 weeks, this month we have a measly 3 days off together. Sheesh.

In an attempt to make our now super-rare days off together a little more special... we decided to go to Dreamworld yesterday. Once upon a time, we used to frequent both Dreamworld and Movieworld, but it has been years on years since my last Dreamworld visit. In fact, the last time I was there was when Adam was still working in Dreamworld's Koala Country and on the way home I had a little mind implosion and drove the wrong way up the road. Pretty sure that Adam's brother Steven has never gotten in a car with me ever since. So I don't mean to keep on with the negativity (it's really not my style), but Dreamworld was a total let down. The mine ride is no longer operating. The Giant Drop and the Tower of Terror are closed for maintenance. The new ride "Shockwave" was out of order for the day, and when we lined up for the Claw they closed it temporarily for maintenance. We did finally manage to find a ride that was operating. I remember spending an extended period of time being stuck on a broken-down Wipeout back when I was a teen, but come hell or high-water I was going on a ride. Talking about high-water...the shark is gone and so is the water underneath and the water spray from the wave is not working either. My old fave is looking aged and a little lot worse for wear. And boy did she sound clunky. It was still an awesome ride, even if I did realise I felt more fragile than I did back-in-the-day. Adam hit the nail on the head when he turned to me and said  "god I feel old on this now".
On a positive note, Adam did get to catch up with his old boss in Koala Country and cuddle one of the Koala's whilst doing so. 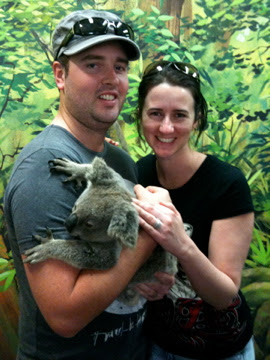 After this I decided to get a foot-long hot-dog for lunch. I had been craving it and looking forward to it for days... Adam and I spent what I am sure was well over an hour walking around Dreamworld looking for hotdogs. Turned out the vast majority of the eateries were also closed, including the hot-dog vendor. So we lined up for over half an hour for me to eat $14 worth of luke-warm fries, post-mix coke and fake nuggets. On the up-side it did come with a Krispy-Kreme donut.
Later that day I saw a brown mark on his shirt, put my finger on it and said 'what's this? chocolate?' and thankfully before I put my finger anywhere near my mouth Adam said 'No, that's Koala poop'. Disaster averted.
To make this post a little brighter, I should tell you...August was actually a fantastic month! On the days that I wasn't working I was always doing something awesome. I have taken some photo's and look forward to sharing what I got up to in more detail. But for now here is a snippet of what I have been up to.
I started the month with a crafting day with Chloe. I discovered the brilliance of mod podge, and why so many DIY bloggers and pinners profess their love for it. 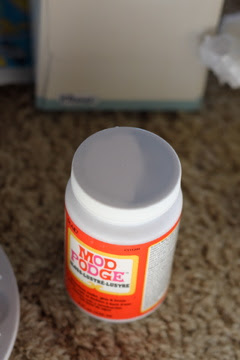 I got half-way through making something to decorate the home out of this stuff. Hey, everyone loves fake fruit! 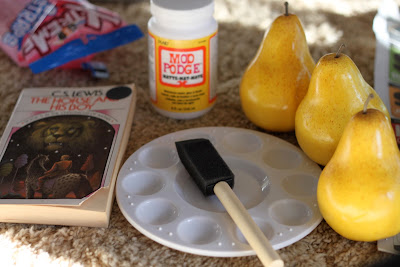 And got a little messy on another project... 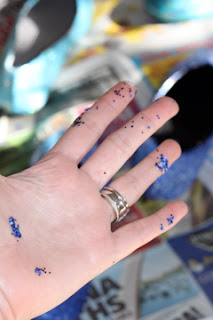 In addition to my crafting endeavours - Adam and I spent a day changing all the washers in our house. This was a first for me - now I am awesome at fixing a leaky tap!
I had a blast working at Greazefest as a part of ThatShop. 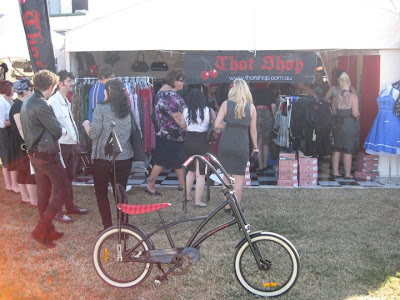 I went to Byron for a girls weekend, to celebrate the birth date of My Friend Emma. My name quickly became Barry, because I was the bloke who could operate the BBQ. 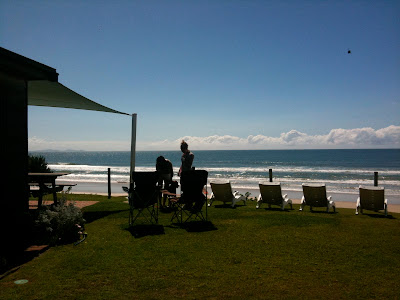 I taught Lady Mausey how to use a computer, e-mail and navigate Facebook. She is doing so well, especially for someone who is learning from scratch!
And Adam and I had an adorable French family come to stay in our home for a week and a bit. We had an awesome time with them and wished that they had stayed longer. While Adam was visiting his best-mate Bucky in Canberra, the Drew family took the French family to O'Reillys so the soon-to-be 4 year-old Ylan could feed the birds and have an Aussie family picnic. 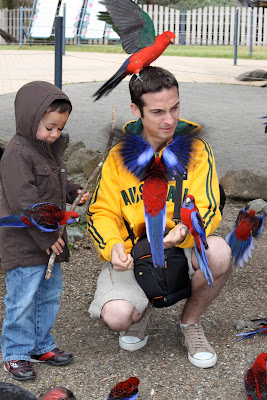 So as you can see, I have a good pile of reasons for being missing from the interwebs during the month of August, and as a result...we have a lot of catching up to do. So much to show you. So much to do and so little time.