Happy Birthday To My Handsome Husband! 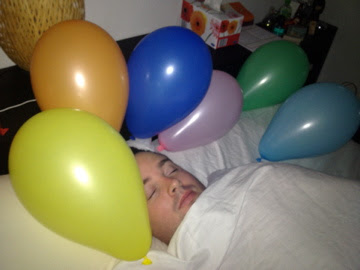 
Of course I woke him up by covering him in balloons, singing Happy Birthday followed by a repetitious mediocre rendition of You're the Best from The Karate Kid (1984).
Adam and I are big fans of movies from the 80's. We watched Bill and Ted's Excellent Adventure (1989) earlier this week, but Adam's favourite movies of all time would have to be the Back to the Future trilogy (1985, 1989, 1990). So when I stumbled upon a link to a semi-DIY Back to the Future themed card, I jumped on it. Well technically I didn't jump on it, but I sure did download it quick-smart! Cubeecraft is an awesome paper-craft website with free downloadables of popular characters from movies, tv shows, video games etc. Years ago I utilised it to provide crafting activities for Chloe's Birthday. A more recent development for this website is PixelPages which is where I downloaded this: 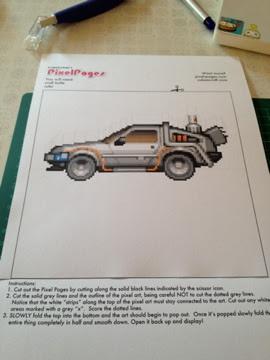 I followed the instructions and used a craft scalpel to cut the appropriate lines, and managed to turn this flat printout of the Delorean (that's the Back to the Future time machine car, for those not in the know), into this: 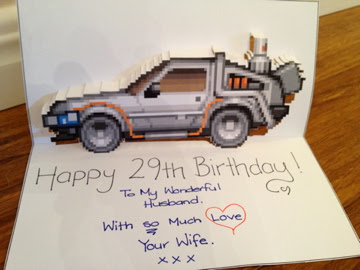 
Inspired by my husband's ability to beautifully gift wrap a present (he once gave me Christmas presents wrapped in potato stamped paper!), I now have an obsession with gift wrapping, ribbon, stamps and hand-made cards and gift tags.
For Adam's birthday present gift-tags I actually hand-made my own stamps! As it was my first time doing this, I went for simple shapes that corresponded to the theme of the present. After all, we are both just a pair of big-kids at heart :)
I raided our miscellaneous stationary box for some old erasers, and a lead pencil, had my craft scalpel handy and actually sourced some tools from my manicure/pedicure box as well. 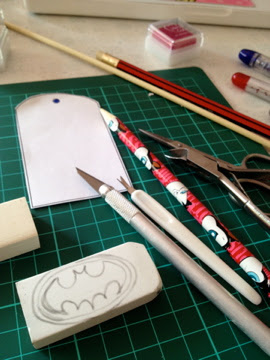 I drew the batman symbol on the eraser and then utilised the tools at my disposal to cut down and out the shape I wanted. 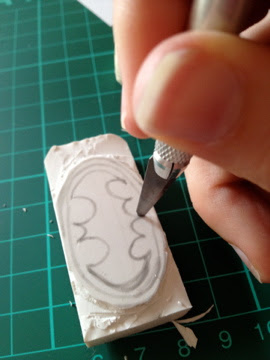 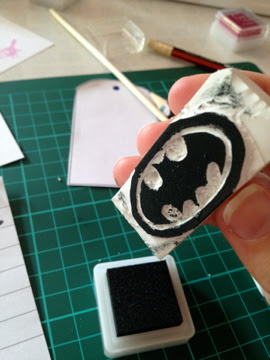 I may have accidentally taken off too much of one ear and one wing tip, but for my first DIY stamp making effort, I was pretty impressed! And to make it even better, It was free!. I didn't have to leave the house to buy anything because I already owned everything I needed to make it! So I made another one for his other gift... 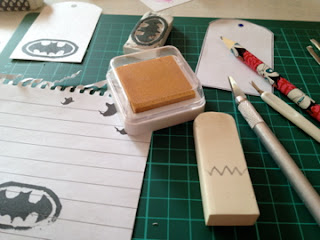 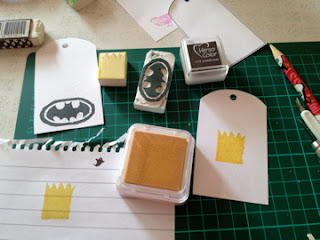 I then wrote some relevant quotes on them, and attached them to his presents. 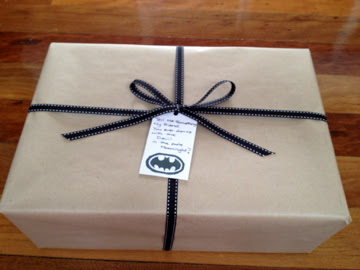 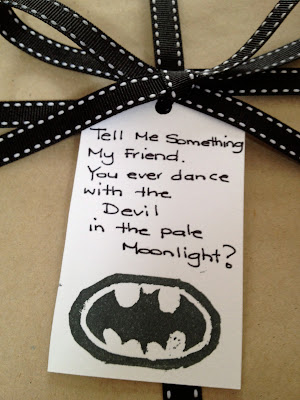 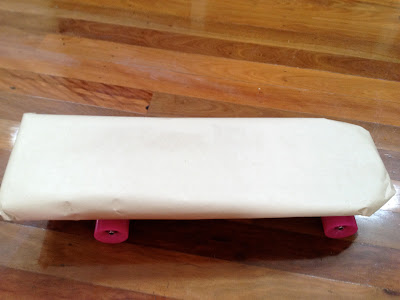 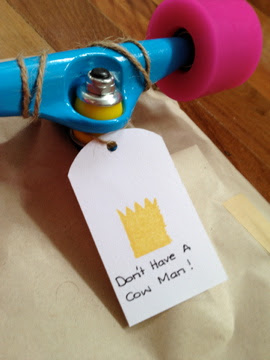 The first gift was a pair of Batman/Joker Themed shoes and the second was believe it or not (I know it's hard to tell in the picture) - a skateboard! This skateboard is actually shaped and coloured to look like the one used by Bart Simpson. After the present opening we spent two hours of Adam's birthday morning having a nurse interview with our new IVF centre. It was a big chunk out of Adam's birthday, but the girls so far have been great (they even called me Kristy - not Kirsty!). We now feel even better about our choice to move. After that was complete, we grabbed Adam a birthday coffee and a few groceries so that I could go home and bake him a birthday cake.

Remember how I told you about Adam's spectacular effort with my Nyan Cat Cake? Well with that in mind, I knew I had to do something super spesh. My husband has a true love of chocolate. We're talking a 'will get in a car at 9pm and drive to the servo just to get chocolate' kind of true love. Having never baked a chocolate cake from scratch (with the exception of a 3-minute chocolate Mug cake... I must find that recipe for you), I decided it was well over due. The cake I chose to bake I originally found on Pinterest. It has been on my to-do list since before I even learned to pin. Back then, Adam had seen it over my shoulder and mentioned that if I ever wanted to bake him that cake I could... in a hint, hint, nudge, nudge kind of way. I stored that in my not so reliable memory banks and I figured being that it was his birthday, it was time to give this cake a crack. I donned my apron and got to work. 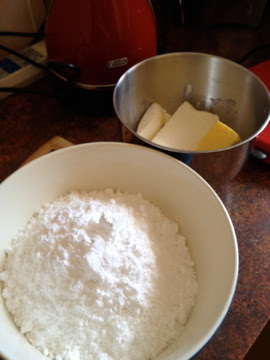 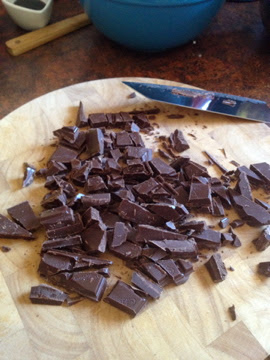 Adam got some time to relax, play Playstation and do a few other things about the house while I baked. May seem a little boring, but it was lovely! 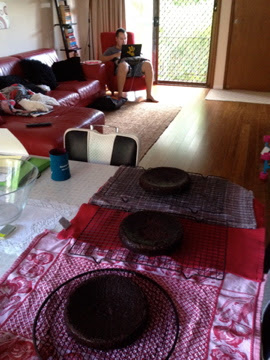 I baked a three-layer chocolate cake!!!

Not only did I do that, but I baked a Three Layer Chocolate Cake, with Cream Cheese and Peanut Butter Frosting and a Dark Chocolate and Peanut Butter Glaze (!). I am no expert in the cake baking arena. I have been battling with either terrible or terribly tiny ovens since I moved out of my parents home. But I do love it. And I do want to learn. And hell, I will get my 1970's mission brown oven with a door-that-doesn't-close to work as best I possibly can until I can afford a new kitchen. Which, let's face it... with IVF in the mix, is a long, long, crazy long way away. It being somewhat inept will not deter me. Thank god I have my chilli red mix master and my super awesome dishwasher to support my cake-baking needs. Persistance will help me to tackle the terrible oven! 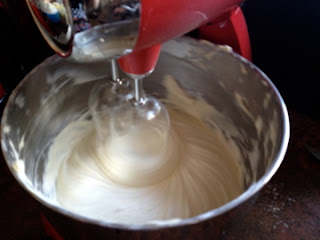 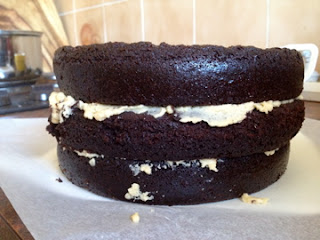 When it comes to icing cakes, I have only really attempted it once before, and never had I baked any sort of stacked cake. I have come to realise, that frosting-free Banana cakes have become my only staple. It's time to branch out and learn some new skills.
Like a good wife, during the many stages of baking this cake, I would take a spoon over to the Birthday Boy to sample. He LOVED the frosting and when I roused on him for eating too much of it - he declared that because it was his birthday I should have made extra for him to eat! I shoo-ed him out of the kitchen and continued the attempt to frost the cake. 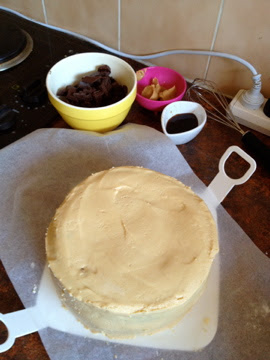 It took a bit of time, common sense and patience, but in the end I was really happy with it! Not bad for a N00b. We had our HMV vintage record player going, so I was baking and singing along to Johnny Cash and The Beatles, which had me feeling that I was ever so slightly closer to my dream of being barefoot and pregnant in the kitchen. 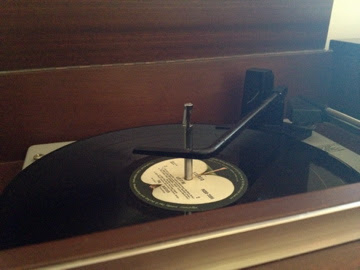 I am also inexperienced at melting chocolate, but having seen it done on MasterChef I had a much better concept of how the whole thing was done (you know the whole water bath deal-io) and hence I somehow successfully made the glaze! Wa-hoo! 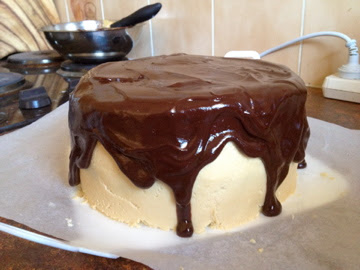 I was so bursting with pride, I got Adam to take a picture of me in my apron, with the cake. 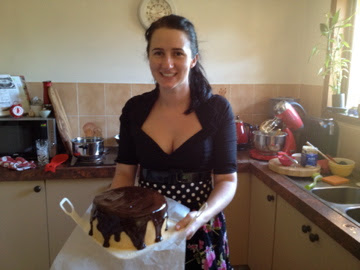 At the Birthday Boy's request, we went to Shogun Japanese Restaurant for dinner, where we drank a little warm sake and shared meals with two of Adam's closest friends from the Academy and their gorgeous girlfriends (sorry you couldn't be there Forbe's!). They were great company, which made for a lovely night topped off with cake! 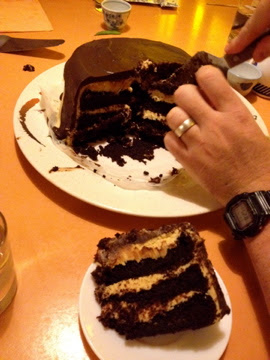 Definitely not for the faint hearted. This cake is delicious, but it is rich!

You can find the recipe and instructions that I used to bake this amazing cake from this fantastic Smitten Kitchen Blog Post.