Being that Adam and I are both shift-workers and have been together since our very early twenties, somewhere along the track we started date night. It didn't have to be a super-spesh, expensive night out - simply a night where we make the concerted effort to spend some quality time together - just the two of us.
Before our 1st wedding anniversary rolled around, I came to the realisation that we had fallen out of the habit of Date Nights.
My anniversary present to Adam was a full years worth of Date Night's. One a month, pre-organised by me - for the entire year. 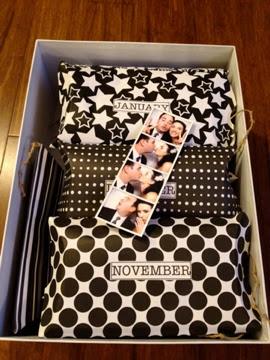 I made 12 envelopes using scrapbook paper and an envelope template given to me as a gift by my friend Chloe, yet again - more proof of what an awesome gift-giver Chloe is! 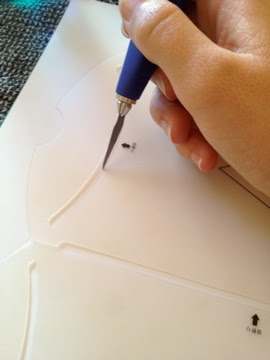 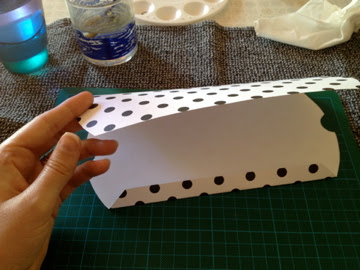 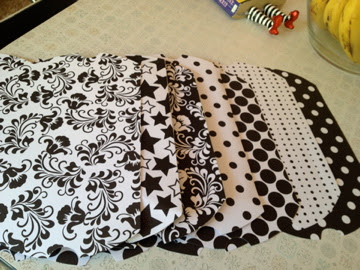 I spent a lot of time googling the interwebs and racking my brains, to decide on a date for each month, and then printed out the details and pictures that could be used as clues for each date. 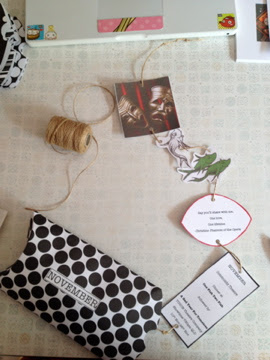 I tied them all together with string and anchored them in each envelope so that Adam would pull the picture clues out first. He could then take a guess at the date, and see if he was right as the details would be on the last card. 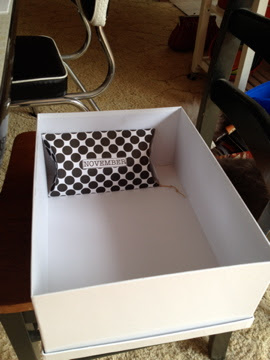 One down. Eleven to go.
It was a labour of love and well worth it in the end. 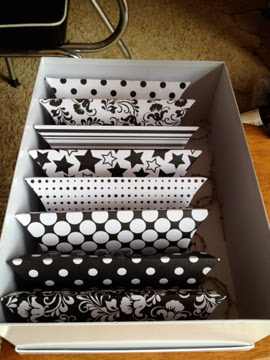 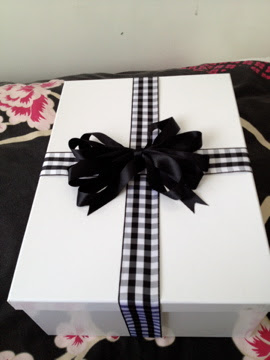 
NOVEMBER:
The Clues...
Theatrical Masks, one fish, two fish, quote "Say you'll share with me, One love. One lifetime." -Christine Phantom of the Opera.
What was planned...
Dinner at One Fish, Two Fish followed by A Bad Year for Tomatoes - A Community Theatre Production.
The Date...
One Fish, Two Fish was a fantastic restaurant in Coolangatta. Please note the use of the word was. It's the same restaurant we had my birthday dinner at last year. Thankfully I organised this date first, because out of absolutely nowhere this wonderful restaurant closed down. It was possibly only a week or two after our date and the restaurant had disappeared. We never got to the Community Theatre Production... we were too busy enjoying each others company and our food (delicious porkbelly...mmm).


DECEMBER:
The Clues...
Sushi, two couples holding hands, a microphone, quote "At last my love has come along. My lonely days are over. And life is like a song." -Etta James.
What was planned...
It's a DOUBLE DATE!!
Shogun Japanese Restaurant.
Take your shoes off to enjoy traditional Japanese Cuisine and Karaoke! The fun and deliciousness will be shared with DrewBoy and BrownDog.
The Date...
The double date, doubled in number and became more of a Quadruple date! 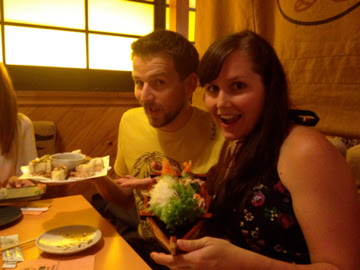 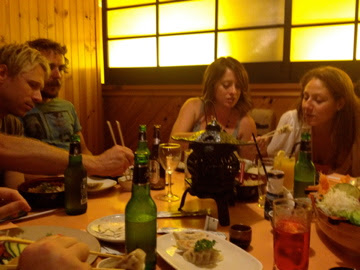 And it was fantastic fun. We highly recommend Shogun. 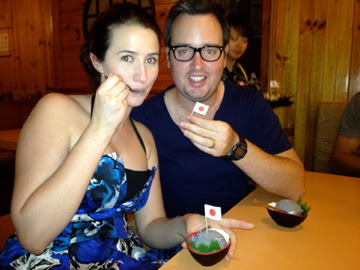 The food was authentic and delicious, the atmosphere was great (who doesn't love taking their shoes off and sitting on the floor?) and we totally rocked at Karaoke. I sang Unchained Melody completely sober, and utterly terribly and still got applause. Shame? I have none.
Note to self: I really must learn how to edit red eye's out on my computer.


JANUARY:
The Clues...
A Golf ball, screenshot of TimeCrisis videogame, Homer and Marge in the PuttPutt Windmill.
What was planned...
A Day Out in Surfers Paradise.
We'll be finding our inner kid at Timezone, and getting it on like Homer and Marge in the windmill at King Tutts Putt Putt.
The Date...
As much fun as this date could have been... we traded it in for a day at MovieWorld. 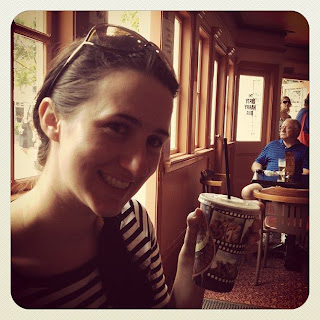 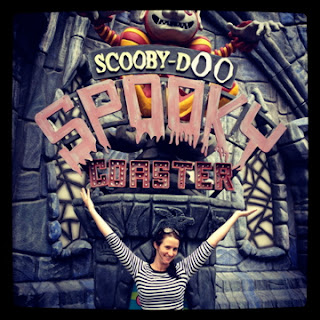 I once went on the Scooby-Doo Sppoky Coaster ELEVEN times in a row. It is still my most favourite ride. Keep your arms up!! 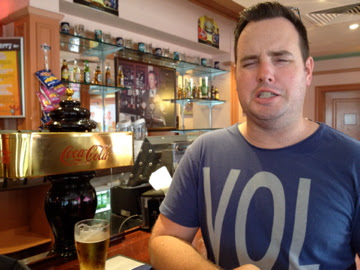 That's Adam's attempt at pulling a Clint Eastwood face whilst we were hanging out in the Dirty Harry Bar. We tried out the new Green Lantern ride (awesome!) and when we were done for the day - had Thai takeout for dinner and went to the cinema to see The Muppets! A fantastic trade in, if you ask me!


FEBRUARY:
The Clues...
A turkish restaurant, a faulty product symbol, a basil plant, a dead parrot, quote "Your mother was a hamster. And your father smelt of elderberries." - French Taunter.
What was planned...
Dinner and a Show.
Dinner at Ahmet's SouthBank, followed by a short stroll to QPAC and An Evening with John Cleese.
The Date...
We decided to make a proper day of it and went to see some exhibitions at GoMA. That's Gallery of Modern Art, for those of you not familiar with the acronym. First we saw the Matisse: Drawing Life exhibit, a French artist who began painting in 1889, and Japanese artist Yayoi Kusama: Look Now, See Forever exhibit.  Both were completely different, but very enjoyable. The Matisse exhibit was a more traditional art exhibition and it was interesting to see his progression through time, his impact and his life story. The Yayoi exhibit was visual eye-candy and a whole lot of fun! You were even encouraged to take pictures! 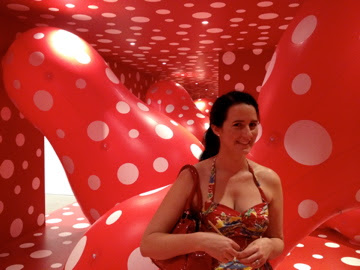 The Obliteration Room, was a room that on the first day of the exhibit opening was full of everyday objects that were painted completely white. All visitors are given sticky dots of different sizes and colours to put anywhere in the room. The result? 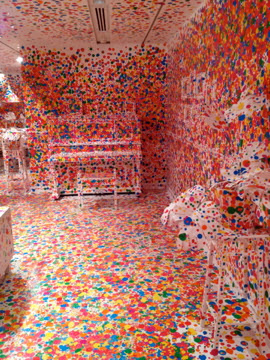 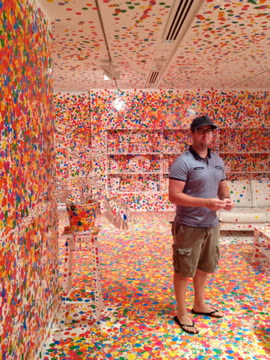 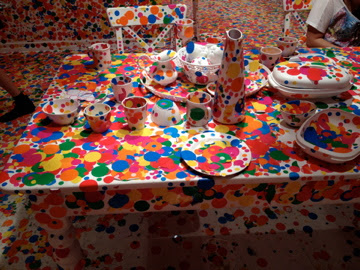 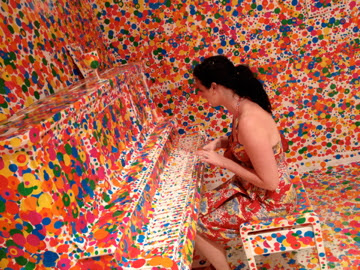 Adam and I love to browse the quirky books and bits and pieces in the GoMA Gallery Store, and the State Library of Queensland Library Shop - where we found this print, which we are seriously contemplating purchasing to frame and hang on our white brick wall. 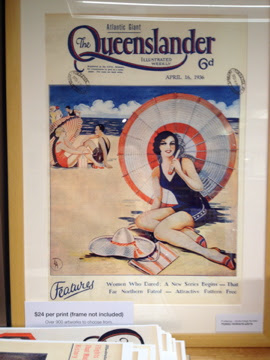 We did go to Ahmet's for dinner as planned, but after having snacked at a cafe in the afternoon (and having our stomach's shrunken in size from lite'n'easy), we enjoyed the flavour of the delicious Turkish food, but it was embarrassing how much we couldn't eat!
Finally, we were able to take our seats in the Lyric Theatre at QPAC and watch the ever hilarious Mr John Cleese take the stage. Did you know he is 72? Technically, it was 'An Evening with John Cleese' - where he sat on stage and chatted about his life, showing photographs and film clips, telling stories and making us all laugh. It was very enjoyable, and we are glad we had the opportunity to see him. We did feel a little let down by the ticket price, when you considered the production value. Technically, you would get better bang-for-your-buck if you were to go see Mary Poppins... Which I still can't believe I missed - considering how much of a fan I am of the original movie. A spoonful of sugar helps the IVF medicine go down!


Hhmmm... Better get on to organising the next date night, before March ends!